I believe that in order to express ourselves visually we have to use our photographic skills during both the capture and post-production stages of image creation. The famous photographer Ansel Adams said that photography was “a powerful medium of expression and communication” that “offers an infinite variety of perception, interpretation and execution”.

I believe that the ‘unfeeling eye’ of the camera is a tool that collects information, but is seldom faithful at recording how we felt about what we saw. This information must often be interpreted in order to communicate our personal account of what we have witnessed and experienced. Ansel is quoted as saying “The negative is the equivalent of the composer’s score, and the print the performance”.

Some photographers post images with the Acronym ‘SOOC’ (Straight out of Camera). Although this is useful to see how the camera’s sensor and lens recorded the scene that was in front of it it is important to remember that the camera has no soul. The camera may record faithfully, but it also sees the world differently to the way we may have ‘experienced’ the scene. The camera has no soul. 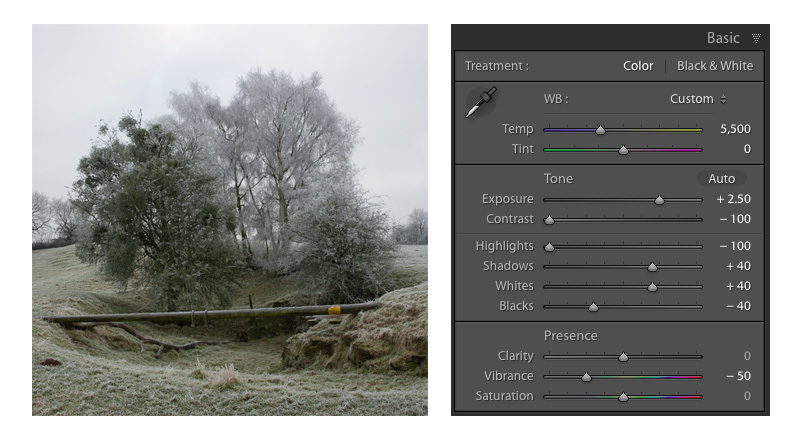 In my photograph of a sub-zero morning in the middle of a British winter the processing of the image was critical to the faithful communication of what I ‘felt’ about the scene I was capturing. Although I am experienced at image editing, and very comfortable with Adobe’s Lightroom software, I initially struggled to find the appropriate settings that could express how I felt about the scene. The exposure compensation had already been raised one stop in camera but some rather extreme settings were required to express the silent, still and frozen landscape I experienced.

Image Editing in Photoshop is often referred to as ‘image manipulation’ which can have derogatory connotations, as if the editing process is cheating. As the camera seldom records the scene faithfully, the work we carry out in Lightroom should be seen as our ‘performance’. This is where we get to complete our story and express ourselves visually. The post-production has been part of the holistic process of photography since the invention of photography itself. we should not apologise for the work carried out to take false pride in the declaration that now work was carried out in post. My answer to the latter, is always “why not?”