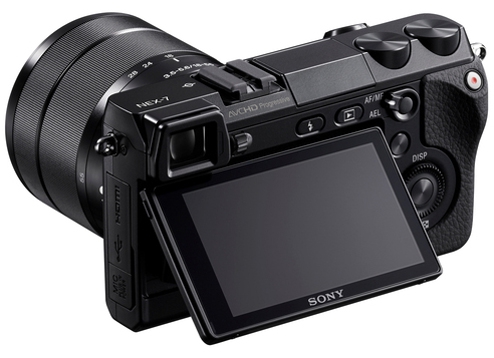 I have just taken delivery of a Sony NEX-7. And the verdict is…

With large sensors finally finding their way into small cameras I have been looking to update my ageing pocket-sized Canon G10 for some time. Although the G10 captured Raw images – I often thought that there wasn’t a lot of point. The extended dynamic range of DSLR Raw files just couldn’t be found in the Raw files captured by the tiny sensor of the G10. Pushing the ISO of the sensor to anything higher than 80 resulted in serious amounts of noise compared to my full-frame Nikon DSLR. Although it was a satisfying small brick of metal to hold in my hands I could not help feeling disappointed after viewing the images on my computer and never really felt happy capturing images with the camera. Although the G10 had an optical viewfinder it was so small I often found myself moving my face around the back of the camera looking for it! The new Canon G1X with large sensor has the same disappointingly small viewfinder. I borrowed an Olympus Pen when I went to London last year and elected to fly with carry-on luggage only (no room for my DSLR). Although I found the optional electronic viewfinder (EVF) great for framing my images (and far better than the 235,000 pixel EVFs I had last used on Prosumer fixed-lens cameras 10 years before) I was not wrapped to find shutter lag and images that, although better than the G10, still left me wanting more in terms of image quality and handling.

The ‘no-compromise’ package finally  arrived in the shape of a beautifully crafted metal Sony NEX-7. With a whopping 2.4 megapixel EVF (same as a HD TV) and APS-C 24 Megapixel sensor and lightening fast shutter response I finally found the pocket-rocket I have been looking for. I wrote in one of my books at the start of the millennium about the potential of EVF technology but with only Konica-Minolta at the time taking the technology seriously (offering 4 times the resolution of the other digicams of the era) we have had to wait for Sony to push the boundaries of the technology and offer us a real alternative to the optical viewfinders we find in all DSLR cameras. The EVF of the NEX-7 has certain advantages over an optical viewfinder, e.g. it not only allows the camera body to be made really small but the viewfinder is as big as one you will find on a full-frame DSLR – switch from the NEX-7 viewfinder to a cropped-frame budget DSLR will make you feel that you are now looking down a long tunnel at a relatively small image. The EVF also gives the user the advantage of looking at how the image will appear after it has been captured (applying the exposure and depth-of-field to the view before it has been captured). I found this a novel and enjoyable capturing experience – rolling the exposure compensation dial when necessary became very intuitive rather than a process of approximation and guess work (especially when you can see a live histogram in the viewfinder).

The abundant programmable control wheels on the NEX-7 makes it possible to adjust all of my shooting parameters without removing the camera from my eye. Although I have been a Nikon shooter for many years  I have owned a couple of Sony DSLR’s (the original A100 and an A700) and have come to respect Sony’s desire to supply photographers with the finest pro-grade lenses. The 85 mm and 135mm prime Z lenses made for Sony by Carl Zeiss are some of the sharpest glass I have had the pleasure of shooting with over the last decade. Wanting to have my cake and eat it I have not only taken delivery of a range of Sony E-Mount primes and zooms I have also purchased  a ‘Novoflex’ adapter so that I can mount my Nikkor primes on the NEX-7 body.

Using my Nikkor lenses may restrict me to using Aperture priority and manual focus (this is how I started my photography career) but surprisingly The NEX-7 makes this a quick and easy affair. A unique option called ‘focus-peaking’ allows you to quickly move to the point of focus as the higher contrast edges can be outlined with a colour when they fall in the depth of field. The operation is so quick it makes focussing with a Rangefinder camera seem slow!

Another pleasant and unexpected surprise is the outstanding quality of the HD video. I don’t think this is as good as a DSLR, however, … I think it’s better!! AVCHD 1080 video at 50fps with phase-detection auto-focus and adjustable exposure during capture is something that exceeded my expectations for a pocket camera.