When photographers realise that it is the prime lenses, rather than the zooms, that hold a special place in the heart of most photographers, the journey to find the perfect partner begins. There is an old saying that ‘we date our cameras but marry our lenses’. This is due to the fact that our cameras come and go over the years, but some great lenses can be for life. Sony’s E-Mount is responsible for breathing new life into many vintage lenses that have not seen the light of day since the analogue era fell into decline. Lens adapters have completed the picture by connecting the past with the present. These old lenses still hold a certain charm but some photographers prefer to use native E-Mount lenses (avoiding the use of having to use a lens adapter) to enjoy state-of-the art Autofocus performance such as Lock-on AF: Expand Flexible Spot and Eye AF.

Many photographers gravitate to the 35mm and 50mm focal lengths on a full-frame camera to capture their ‘Street’ and documentary style images. Many adopt the ‘f/8 and be there’ rule to ensure subjects are framed within their environment (connecting the subject to their background with sharp focus – extended depth-of-field).

I use Sony’s lightweight FE35F28Z at f/8 for this street style of image making, but I also choose to switch to a short telephoto or ‘portrait’ lens (85mm) and use the wider apertures to isolate characters within their environment, thereby creating a true portrait rather than an environmental portrait (although this may only be a fleeting ‘camera-aware’ connection). I believe this creates a more interesting photographic narrative when images captured with different focal lengths are placed together as part of an extended story. Key characters are highlighted in the story by using the 85mm lens at a wide aperture and this, I believe, creates a richer visual tapestry, the two different styles of photography complementing each other. 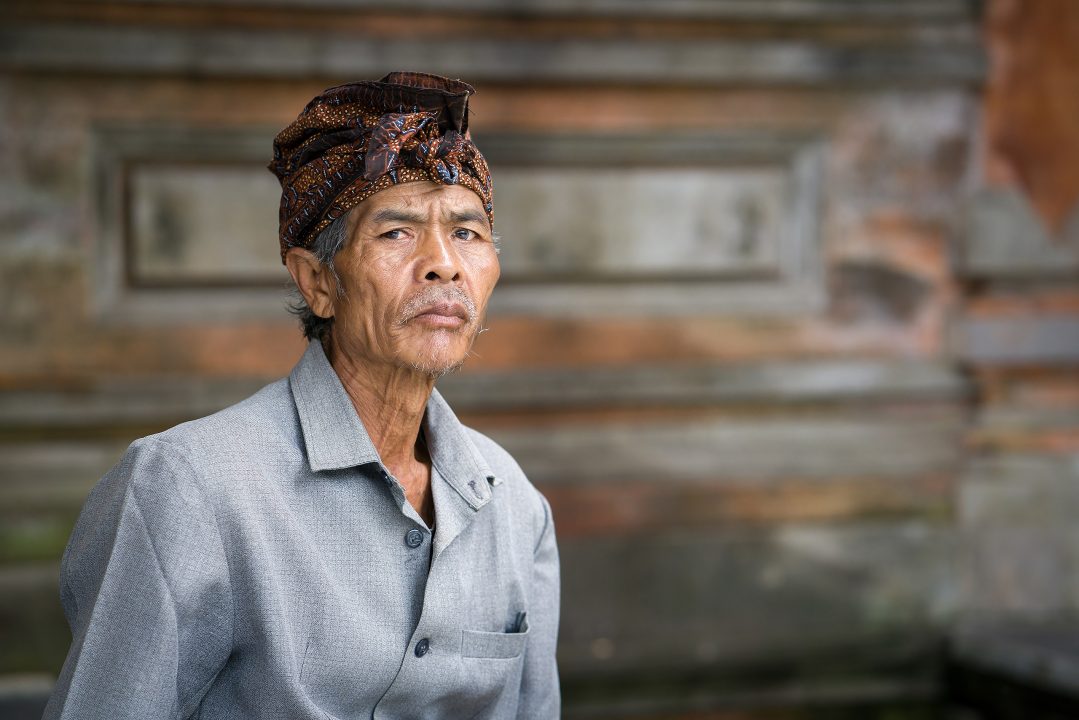 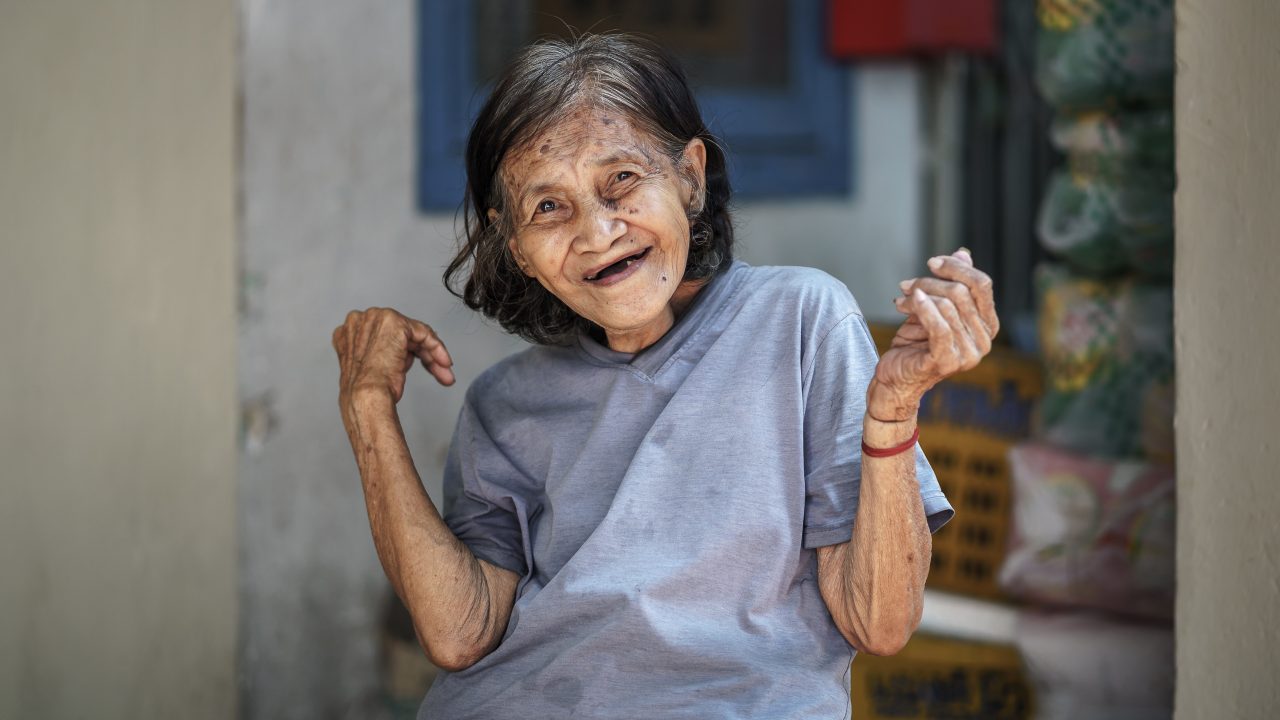 An 85mm lens is an ideal focal length for this type of work because you are close enough to your subject to engage with them and the f/1.8 aperture is wide enough for ‘figure and ground’ separation. The images above illustrate how I work a portrait. As I approach my subject I choose a vantage point that provided the best background. I then move closer, engage with the subject and then capture the tightly framed portrait image. The instant the subject becomes ‘camera-aware’ I take a frame (the first image of the pair), I then lower the camera immediately to engage with the subject. The camera is often lowered so quickly upon eye contact that most subjects are not sure if I have even taken a picture or not. This allows me to interact positively with the subject and move towards a collaborative portrait before the camera is raised again (the second image). When I am working quickly, with subjects who are not models, I will typically stop down to f/2.8, or f/4 (especially when the head is slightly angled), to ensure adequate depth of field – although with Eye AF on the A7RII and A9 cameras I sometimes choose to shoot wide open. Many wide aperture prime lenses are not very sharp when used at their widest apertures, but if the lens does perform wide open – then in my books it’s a keeper. The Zeiss Batis 1.8/85 and Sony’s FE 1.8/85 both offer excellent sharpness when used wide-open.

Some photographers are attracted to ultra wide f/1.4 lenses with their super shallow depth of field and beautiful background ‘bokeh’, but if the lens is not sharp, in my opinion, it is all for naught. Sony’s 1.4/85 GM is sharp wide open but you have to consider whether you will have enough depth of field when shooting wide open at close range. At close range (head and shoulder framing distance), an f/1.4 aperture on a full-frame camera does not deliver enough depth of field for most portrait situations, i.e. the eye and eyebrow are unlikely to both be sharp. There is also the weight to consider. Most f/1.4 85mm lenses will be double the size and weight of the f/1.8 lenses. I am happy to find a place in my messenger bag (the street photographers bag of choice) for lenses weighing less than half a kilo (1.1Ibs) but zooms and heavy primes are often more comfortably carried in backpacks or left in the photographic studio. 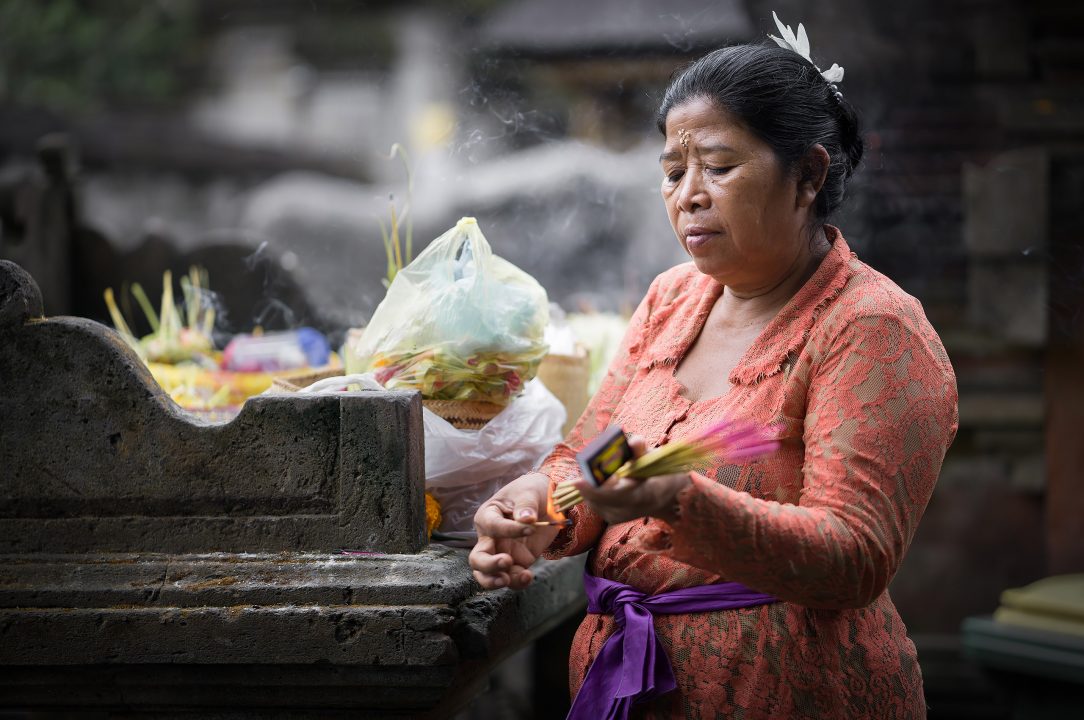 In the image of the woman lighting incense, I have captured this with the 1.8/85 with the aperture wide open in order to separate the subject from the background. Although many photographers are attracted to using maximum aperture of these 85mm primes to the advantage of the ‘bokeh’, you have to be very careful to focus accurately, as you don’t have a lot of depth of field to play with (both eyes will rarely be sharp – even at this distance – if your subject is at an angle to the camera ). The option to use Eye-AF in AF-C (Continuous Autofocus), found in the latest Alpha cameras, is incredibly useful in achieving an ultra-reliable hit rate of usable images is a real game changer. 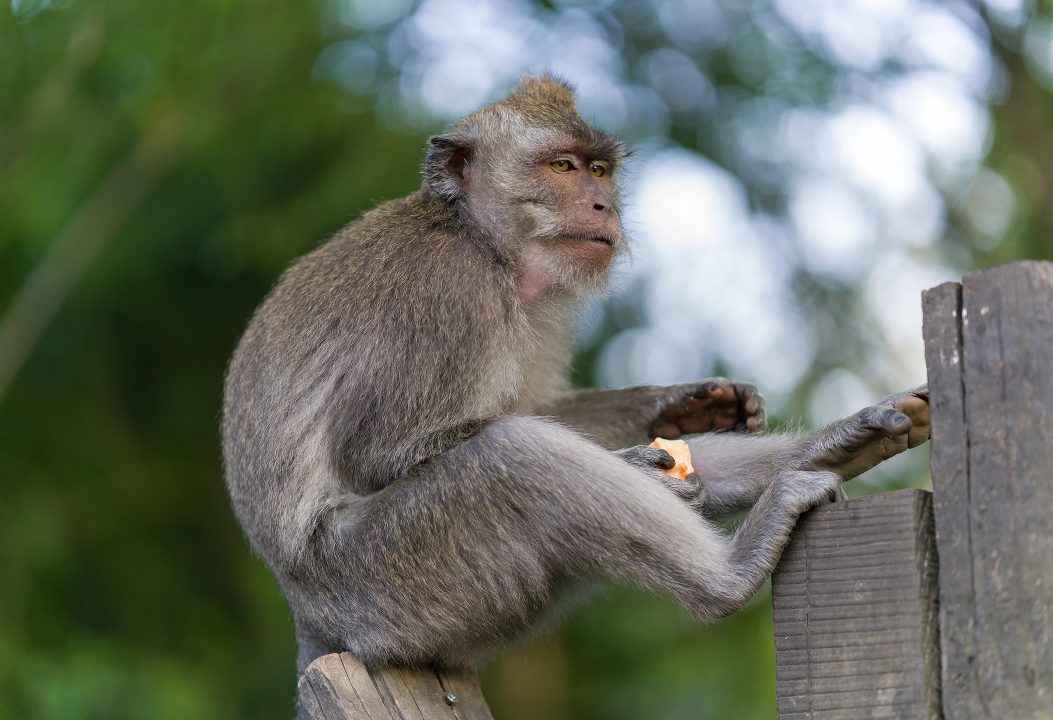 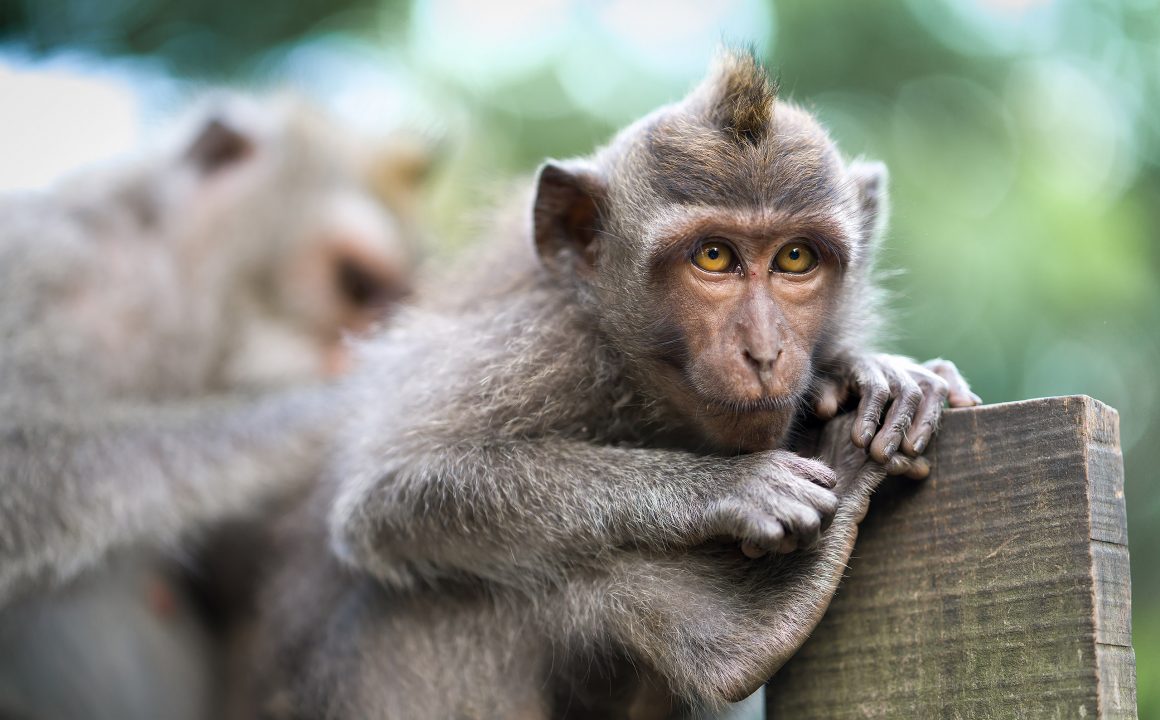 The images of these monkeys sitting on a fence were captured with a 1.8/85 with the aperture wide open at f/1.8 and shows the impressive sharpness of the 85mm lens and the beautiful ‘Bokeh’ of the highlights. Unfortunately Sony’s camera CPU fails to recognize a monkey’s face as a face at all, and so the Face Detect AF and the Eye-AF cannot be used to ensure the monkey’s eye is sharp. Plan B involves dropping into Manual Focus and using Focus Magnify to nail they eye (not easy if the monkey is fidgeting). This experience served to remind me just how much I have now come to rely on Eye-AF and how easy it has made my craft of achieving pin-sharp focus on wide aperture lenses. 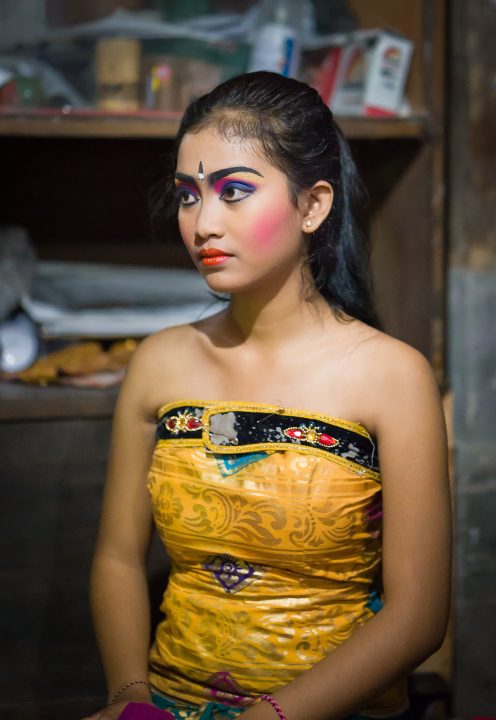 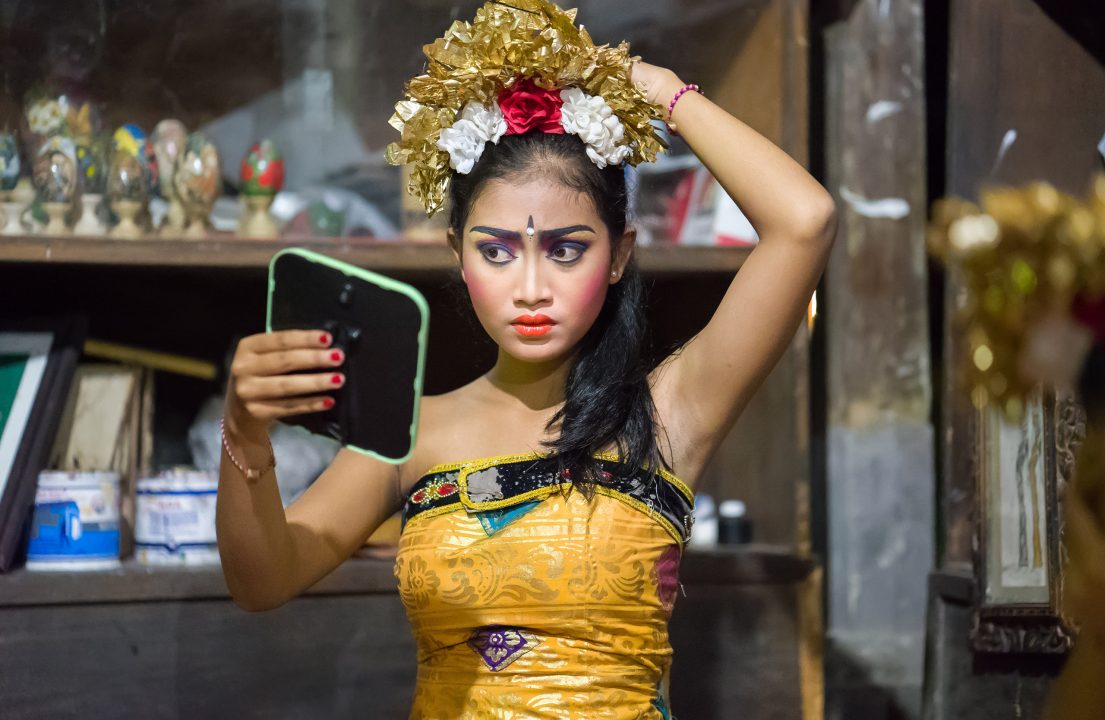 The images of the young Balinese dancer were captured with an A7SII and the 1.8/ 85 in very low ambient light at ISO 12,800. I am still amazed that A7S and A7SII can focus in such low light. The A7S and A7SII does not have any Phase Detect AF (Contrast Detect AF only) but its low light ability to find and lock on an edge in low light (-4EV) is very impressive. The 85mm portrait primes rarely missed focus – even with the AF illuminator switched off. The extra 1.3 stop advantage over an FE90M28 or FE2470F28 can be helpful in this regard and also has the added advantage of keeping the ISO lower – although the A7SII is comfortable at speeds up to and exceeding ISO 51,200. One of the advantages of using Sony’s FE 1.8/85 stopped down in low light, compared to the FE85F14GM, is that the aperture of the 1.8 prime momentarily opens wider in AF-S to allow the AF to lock on before returning to the selected aperture. Most of Sony’s FE lenses share this feature but not the FE85F14. If you are working with the 85mm F/1.4 GM or in Continuous AF (AF-C) and you have stopped the aperture down in low levels of ambient light it is recommended to switch the Setting Effect to OFF in the Live View Display setting.

One of the important advantages about choosing a native E-Mount lens, compared to adapted glass, is the ability to retain all of the sophisticated AF features of your E-Mount camera. Being a native E-Mount lens the Sony FE 1.8/85 can quickly turn its attention from capturing portraits using Eye-AF to capturing fast-moving action using Lock-On AF: Expand Flexible Spot (sometimes not available to photographers using lens adapters). The FE 1.8/85mm prime can quickly and accurately track the focus of the Balinese zipping around on their motorbikes or downhill skateboarders travelling at speeds in excess of 60 kilometres per hour. I simply use the memory recall mode on the shoot mode dial to bring up my stored action settings and then shoot bursts of images and choose the decisive moment in post. As you can see from the image above – the eyes have it.

Watch my tutorial movie on how I set up a Sony Alpha to shoot action shots: 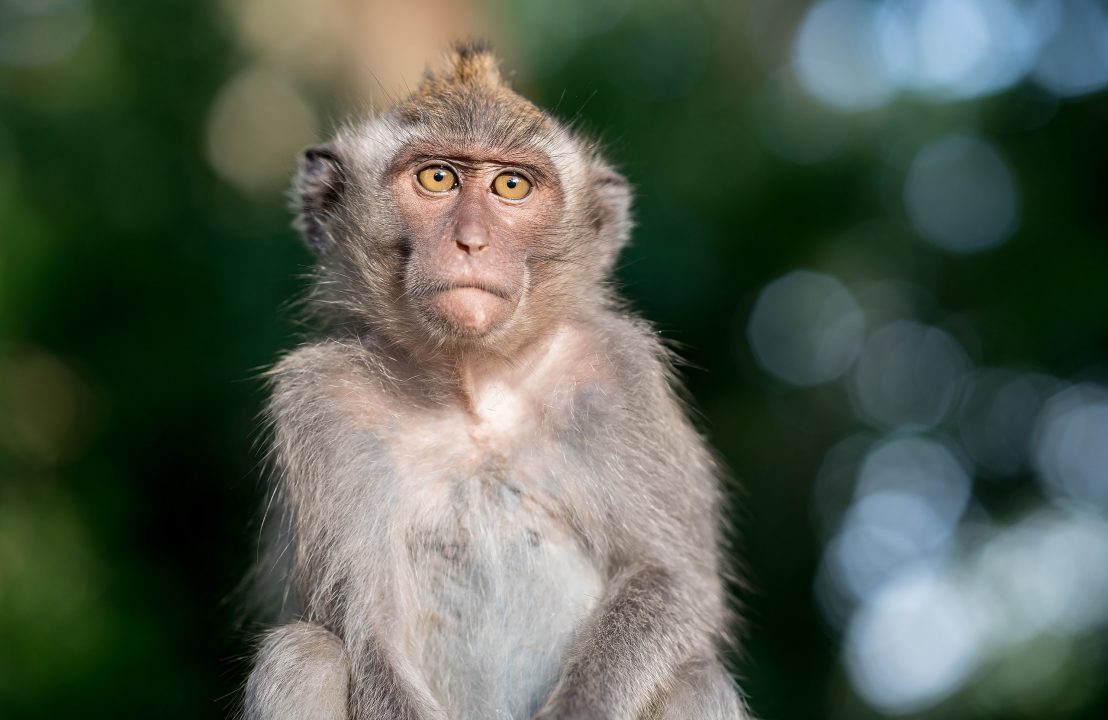 This image is of a monkey was captured with a Batis 1.8/85 at f/2.8. You will, however, notice that the highlight ‘Bokeh’ or background blur is now taking on the octagonal shapes of the iris of the lens as it is no longer shooting wide open. In this regard the circular aperture blades of the Sony lenses provide better bokeh. This may be preferred to the shaped Bokeh highlights that result when using the Batis stopped down.

The image of these monkeys grooming was captured at the closest focus distance of the 85mm f/1.8 lens. If you don’t shoot a lot of Macro, and you are using an A7R, A7RII, A7RIII camera, you may just choose to step back a little and crop in post. If, however, you shoot Macro frequently, you may find the Macro capability of the FE90M28 would be an advantage compared to the extra 1.3 stops of the Sony FE 1.8/85.

Conclusion: If you have not yet worked with a short telephoto prime to capture street photography and portraits I would personally recommend that you invest in a 1.8/85mm prime lens. You never know, it may be a marriage made in heaven.

One thought on “Working with an 85mm prime or ‘portrait lens’”